His days consisted of playing with dirt and a dog 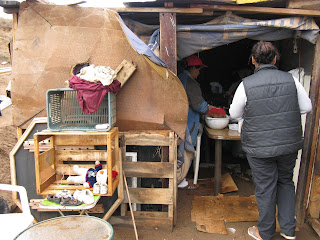 We have people who come to the door of the kitchen asking for leftovers or water. A drunk guy coming from the beach stopped by to ask for a taco. If we have food we give it! We offer a glass of juice, water or a cup of coffee. A woman who is in her 30's dropped by with her three year old son. As we began to listen to her story we found out that her husband and her live nearby in a small trailer with no electricity or running water. They didn’t come here under the greatest of circumstances, We don’t really know the exact story but we do know it involves the husband and people that wear uniforms and badges. The little boy Aidan would be covered head to foot with dirt, he was a true boy, his days consisted of playing in the dirt with his only friend the family dog. We would give the family food, and we would think is there anything else we can do? One of our staff members and our human resources department begin to speak with her. She began to do some simple task around the base to help out. Then as time went by and relationships began we saw how God was working in this family. John was able to get a paying job, Linda helps us on a regular basis in the kitchen and Aidan has started his first year of kindergarten, a real milestone for him is learning to play with other kids and begin the process of getting more socialized. Since he has never been around other kids we have had to help him learn about finding a toilet to pee in when he had the urge, previously he would just whip it out and go wherever he was standing outside. We are all excited to be apart of this families story. It all started with seeing a need and meeting that need and then journeying
alongside.
Posted by mossfamily at 9:36 AM