With the Eartquake in Haiti, and the flooding here in Ensenada we have been in relief mode.

Relief #1 We had a tremendous rainstorm and it caused a lot of flooding, the Alvarez family, who we built a house for two years ago was evacuated, and they were placed in a cold metal roofed building with no beds, or blankets. Scott, a mission builder who is working with us in the kitchen knew this family from that house build and went for a visit. 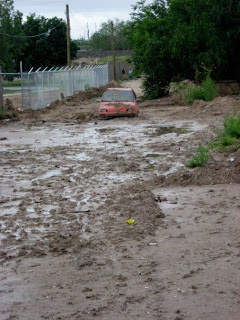 He saw how this family was living and arranged for them to come and stay at the YWAM base in a guest apartment, so they could have nice warm beds to sleep in before returning home after the flooding danger passed. Knowing that this flood had impactd a lot of families in our area we took some hot oatmeal and fed several hundred people who had been displaced due to the flooding.

Relief #2 Nationally YWAM is getting very involved in the relief work that is now going on and will be going on in Haiti. Here is the most recent update from YWAM Haiti, the Director Terry Snow gave a great story of what YWAM is doing in Haiti. The search for survivors has ended and now there are a lot of people to feed,temporary tent cities are going up, and the country is going to have to be rebuilt. Many Haitians are now turning to the Lord for their lives and abandoning the Voodoo religion. For the next year or two, there is going to be a lot of teams from all over the world going to Haiti on outreaches. We already sent a group of 5 from YWAM San Diego Baja for three weeks to help administer the Haitian YWAM base and help organize all the volunteers that are coming to help. The YWAM staff team already there was overwhelmed with how the earthquake had affected them and also trying to deal with all the volunteers that were coming. Our group met a lot of people, that were devastated by the earthquake, and saw things that they will remember forever. Now this first group has come back and we are getting ready to send another team, who knows, maybe the Moss family will go down for a few weeks to help out.

Final Relief... It has been such a huge blessing to have Jim Forgason here with us from SCF! He's been here almost 5 weeks and each week and day had been a relief to us! We are very greatful for his service here, and seek out more people to come down and "Mission Build" with us. You can choose a weekend, or a few weeks up to 6 months. We believe after 6 months of serving you should just become a YWAM'er. If you are interested in coming down to help us, write us and let us know!

It'll be a great experience!

The Homes Of Hope Ministry has started a new Childrens program, this is a help here at the campus, during the time when moms and dads are being given all the information, and begin the process to be selected to receive a home. Bill played his guitar and had the kids singing some spanish praise songs that are the kinds of songs that kids sing at Vacation Bible Schools and camp. 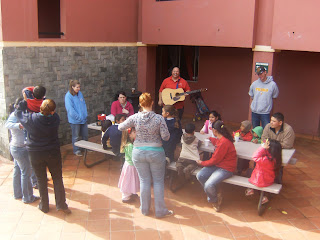 This is bringing us back to the 90's when Bill and Misty made their first trips to Ensenada, Mexico and working with Rancho Agua Viva. While the singing was going on the kids were also working on their craft project, Emily joined in with the other kids and made a little flower vase made from colored paper, straws and sand. They had a memory verse on them to remind the kids that God loves and cares about them. Emily loves to do these little projects and interact with the kids who come. It's special for us to see our daughter speak Spanish and really get involved with the kids.
Posted by mossfamily at 2:17 PM No comments: